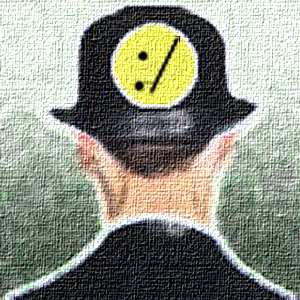 Mr. Eccentric was born in the produce section of a big name supermarket in Muncie, Indiana. Well, to paraphrase The Clash, he wasn't so much born but fell out.

There he was abandoned, taken in and raised by the loving green grocers. Well, semi-loving, as they fashioned a mask out of a paper sac to hide his hideous countenance. We’re unsure if that is the reason he was abandoned or the result of the landing.

It was in the checkout lines that he learned to read. The self-help magazines and conspiracy rags honed his analytical skills, destining him towards greatness on the psychiatric circuit.

On his 18th birthday, it was time to go out on his own. He left the store in search of a part time job to pay for college; for, apparently, you need a degree to treat people. He traveled long and hard, and found a help wanted sign across the street at another supermarket. Being raised with a sac on his head, he thought he’d be perfect for the bag boy position.

In he entered and was promptly arrested as a potential stick-up man. The public, it seems, do not take kindly to folk with grocery bags on their heads… especially ones with a smiley face painted on it.

The courts ruled him insane and he was institutionalized.

Twenty years later, after a stint as a trustee and part time nurse, he was released as “not insane, just eccentric.” But the courts ordered, out of the interests of public decency, that he keep the bag on his noggin.

He was recruited for the New World Otter right at his release during the NWOt’s job fair - held in the sanitarium’s lobby (it’s been apparent to us that no one in their right mind would join this outfit, so we get them where we can).

So if you have a problem… if you have an imponderable… if no one else can help, and you can find him, maybe you can ask… the A-Te… err… Mr. Eccentric.