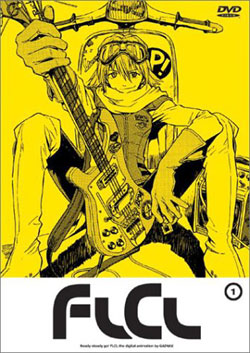 Words to describe FLCL are hard to come by at first, but after a few months of thinking I can confidently wipe the drool from my lip and say: Absurdist Madness!

FLCL has successfully taken all the anime stereotypes and genres and mashed them into about 130 minutes of the most insane, yet breathtaking animation one could ever hope to see. Comedy, drama, sex crazed mania, giant robots, teen angst, aliens on mopeds and more… it’s all here.

It begins when young Takun is smashed in the head with a pull-start electric guitar by the resident rogue space agent Haruko, who’s looking for something. This blow to the head causes Takun’s brain to become an interdimensional gateway by which all sorts of robotic nightmares come through in order to destroy the earth.

How you may ask? Why, buy trying to activate the Medica Mechanico building – which in reality is a giant clothes iron poised to dewrinkle the earth like so many planets prior. And as always, levity ensues as Takun comes to cope with the revolving door his brain has become, the lust he has for both Haruko and Mamini – the clingy, arsonist high schooler who used to date Takun’s brother (thankfully not appearing in the series), and the fact that his father is an idiot who watches too much Lupin III.

Confused yet? Good. I sat and watched the series 8 times and I’m still not all too sure what the heck is going on… so don’t think I gave too much of the plot away.

Aside from the main story, each episode is back with it’s own little, but equally off the wall, sub story – the theme of which always ties into the episodes end battle.

FLCL, though it may cause headaches, is a joy to watch. All the elements and characters mesh together well throughout the 6 episode run, eventually giving up more secrets to the show’s purpose.

The dubbing is excellent. Though I’ve not seen FLCL in Japanese (not that I could translate) or subtitled to know what the original dialog was, I could tell this was a good dub. The dialogue wasn’t clunky and unnatural like most English translations. Furthermore, the script kept its Japanese identity; many anime dubs these days try to pass off downtown Nagasaki as L.A.

The direction ranges from the cinematic, with meticulously drawn backgrounds and lighting – to crudely constructed, overblown slapstick shots. There are even some self-aware/self-mocking comic book form scenes.

The soundtrack is excellent and will stick in your head making you wish you had something heroic to do, just so you don’t waste the moment. Here’s an example:

The Pillows, “Ride On Shooting Star”

The people at Gainax productions out did themselves and I’m praying that they have a follow up in mind.

I have to give FLCL a full 6 out of 6 possible somewhat radioactive but very lethal Gibson guitars. If you are a fan of the strange, the weird, or just do a serious amount of drugs… this is the show for you. The bumpers at Adult Swim say that this show will change your life, and it very well might.

FLCL can be seen from time to time during Cartoon Network’s Adult Swim block. Check your local listings.