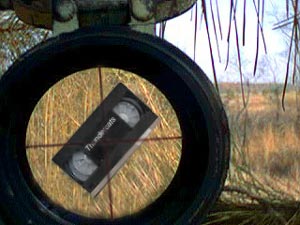 I Do It For the Sport

The thrill of the hunt is one of life’s little pleasures. Some prefer live game – deer, bears, cows, etc. That’s not for me. I’m no PETA freak, mind you. There’s just no challenge to it!

Live quarry is everywhere. You can step outside your door and shoot a pigeon. Hell, there’s no need to shoot them. You can walk right up to most animals and kick them. Not very sporting.

I am a neat stuff hunter. I prefer elusive artifacts to living creatures. It’s nice. For one thing, you don’t have to be a good shot. Nor must you carry air-conditioned/heated tents with flush toilets around in the woods. You can get away with just you… and maybe a sherpa.

And unlike animals, the truly prized artifacts do not come in herds. In some cases you’d be lucky to have two of the same item on the same seaboard. Now there’s hunting for you.

My game of choice is the wily childhood memory. Those things you had and were thrown out, or the things you wish you had (which would have probably been thrown out). 80s toys, music, games, shows are my passion.

There are many ways to hunt. Some are active searches – scouring various flea markets and garage sales. Other times you would come across something by chance (like me finding a used copy of Animalymics in a Walbaums checkout of all places).

That’s another benefit to the artifact hunter… you can do it without any pre-planning – you happen upon something, you get it. Can’t say the same for deer hunters. You happen upon a deer without your equipment, it laughs at you and scurries off.

Of course now things have gotten easier for the artifact hunter thanks to the digital age. It began with eBay, the old world marketplace of the world. If ever you need something, there’s probably someone with a large knife willing to haggle over it.

I’d say this would be akin to an indoor menagerie of exotic animals – it still takes a little skill to score, but you will eventually score.

Still, there is satisfaction when mail arrives and the rarity is yours. Anyone can have a moose head on their wall, how many can say the same of an original Star Wars theatrical poster? Then came the DVD, and the hunt for so many things came to a close. That menagerie of exotic animals has been turned into a meat packing plant. Everything these days is being released onto DVD, from TV shows to 1970s B rated kung-fu zombie flicks. The era of hunting down home dubbed videos or the odd 16mm print is gone.

Not to worry though. The real benefit to neat stuff hunting is there will never be a shortage of rarities. Once the DVD glut is over, even digital videodiscs will become rare. People lose things, Moms throw out things, and things get traded.

When an animal population dies however, well, that’s all she wrote. You can’t bootleg a dodo.

And while the thrill of the hunt is good, there’s nothing wrong with enjoying the bountiful treasures while they’re new.