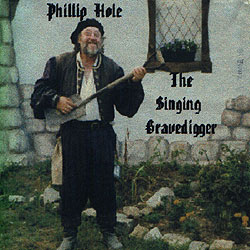 A few years back I attended a small Renaissance Faire in Staten Island, New York. There wasn’t much there for a while. Then halfway through the day a man resembling Mick Fleetwood, brandishing a guitar, stepped onto a box and began drawing a crowd.

“My name is Philip Hole, sing tada…” he sang. And the audience sang “tada,” too, as did I. “This is neat,” I thought and proceeded to buy the CD.

The songs tell of the life and times of the son of the humble boy of fishmongers “Douglas and Martha Theresa (Doug and M.T.) Hole” from 1535 England (what else would you expect from a Renaissance Faire).

Done in a wandering minstrel style with some sea chanteys tossed in, The Singing Gravedigger is a fun album. Hole accompanies himself on a 12-string guitar while singing brilliant lyrics peppered with word play, puns and odd stories. Some songs are Hole’s own, while a few are timeless classics like “Old Rosin the Bow” and Tom Lehrer’s “Irish Ballad.”

All lightheartedly walk on the darker side of life. “Father’s Grave” is about how they moved his father’s grave to build a sewer with dire results, and “Isn’t It Grand,” proclaims: “And always remember the longer you live, the sooner you’ll bloody well die.” Hangin’ Johnny recounts the life of the little pleasures of a town executioner. That’s just to name a handful.

Phillip Hole not only tickles the funny bone, but also stirs up emotions and the imagination. Here, take listen for yourselves.

Samples from Phillip Hole, The Singing Gravedigger by Rick Nestler: (streamed at 16kbps)

Rick Nestler, a guitarist from up-state New York, plays the part of Phillip Hole. In searching for more information on Neslter I came across some clips of his other works. When not singing about graves, he sings about the sea in a Jimmy Buffet-eque style.

Mr. Nestler does not have a website yet, however you can email him at dnestler –at– catskill (dot) net, or write with quill and ink for more information to: <br />