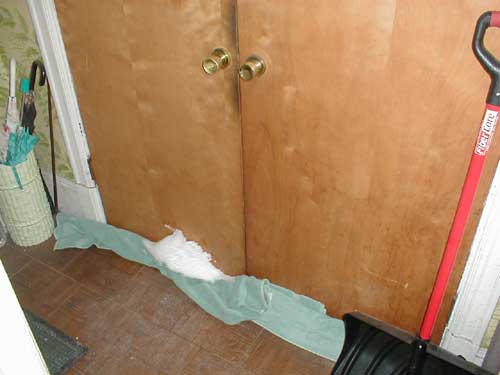 The 4th Day of Spring

Yes, yes, spring is here. Oh how I look forward to being serenaded by Mr. Softee at one in the morning. Who picks these songs anyway? Pop Goes the Weasel and Turkey in the Straw were not meant to be looped while traveling at 1 MPH down a residential street. They were meant to be played once in a while in a barn way out in the country to invoke the spirit of a hoedown. Now they invoke are rage and a frantic search for something large and potentially explosive to throw.

And you know its spring when sneezing causes broken collar bones and whiplash. Only in during spring could a chiropractor benefit from hay fever.

But at least the weather is nice. It will be a few months before we again see scenes like this: This is a shot of my front door the morning of the Presidents Day blizzard. Apparently outside ran out of room, so it decided to shove snow under my door, past the towels that are supposed to keep out cold. Thank god the towels weren’t meant to keep out burglars…

Anyways… So yeah the weather is good. You know, if nature wasn’t so fickle and it wouldn’t throw the entire ecosystem out of whack causing a horrible cataclysm that would kill us all very slowly… or at least cause a case of the sniffles…, year round 50°-60° days would be very pleasant. Think about it for a bit, no need to make a decision right now. When your ready, come back and I’ll see what I can do. In the mean time, have a lousy poem by me (you’ll see more as this venture continues): The flowers are blooming,
Allergies are on the rise.
More Zyrtec we’re consuming,
You can see it in our eyes.

Shoes in adobe cover,
And children in the street.
The cold weather is over,
Let’s complain about the heat.

So have fun while you can
Before this season is done.
In but three months span…
Summer is come.