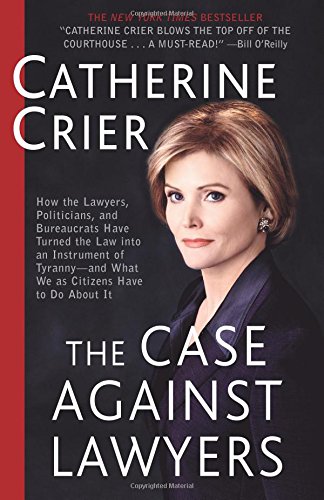 The Case Against Lawyers Catherine Crier, CourtTV show hostess and former CNN anchor, has spotted a growing trend in America – Lawyers are running amuck. They’ve gotten their hands into everything; places you wouldn’t even think they’d be. The Case Against Lawyers shows you what’s going on behind our backs in the justice system.

Go into the bookstore, pick up the book and read the intro and you’ve gotten the gist of this book. Laws have gotten absurd, over complicated and they cater to the rich and the stupid (too often hand in hand in my opinion). Rarely does anyone come out and say such things… which is why I read on.

Chapter 1 deals with the human race’s craving for order and laws… no matter how ridiculous they are. Everything has to have a warning on it these days, or else when stupidity strikes, lawyers clean up.

Next, Crier takes a look how the law, in it’s attempts to raise the bar to have all persons created equal, actually lowers standards so that everyone has to cater to the least common denominator. And so on.

Each is full chapter examples of stupidity and corruption in school systems and Capitol Hill; examples of how all blame is passed on and everyone’s a victim… all fueled by greedy officials and sanctioned by a crumbling legal system. It’s enough to make you cry when you think about it all. I did.

But cheer up; Crier proffers some ideas on how we can regain control of things – Civil courts, criminal courts and public policy all.

The Verdict (how ironic)

All in all, The Case Against Lawyers is intelligently written and provides a strong, non-partisan argument to the fact we’ve all know for years – the system is failing. And for those of you that don’t know it, this book’s gonna open your eyes. Even the most savvy of us could benefit from giving the case against lawyers a look.

The Case Against Lawyers is definitely a book that everyone needs to read. I give it a 5 out of 6 on the arbitrary scale. She makes sense.