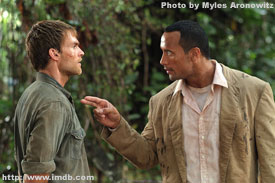 In this Adventure/Comedy, a loan enforcer (The Rock) is sent to Brazil to track down his boss’ maverick archaeologist son (Seann William Scott), who has gotten mixed up in the gold mining town-that-time-evicted of EL Dorado, which is owned by the ever evil/eccentric Christopher Walken. Throw in some rebels (including a washed up Ernie Reyes Jr.) and a few monkeys, simmer and serve (you’ll get that if you go see the film).

Not having seen the Scorpion King, I wasn’t sure what to expect with The Rock in the lead. I was pleasantly surprised – the guy can act. Granted it’s not Shakespeare, but The Rock was able to pull off a good performance. He can do the dramatic bits, as well as the comedic facial and verbal beats (a good example would be the “I hebt monkeebs” scene a little more than halfway through the movie).

Walken was good as the low-key madman. However, I felt they could have done a little more with him, since he is the villain after all…

Seann William Scott was great as Travis. He definitely plays a good loon who’s been in the jungle too long, and I hope to see him in more stuff. (Yes I know he’s been in the American Pie movies, but I’ve not seen them and really don’t care too… though I might now just to see what else this boy can do).

The story was well rounded for a WWE vehicle (Mr. McMahon was the producer). The plot made sense, and the jokes were well played (including inside ones like Walken asking “What am I, psychic?”). No odd tangents were added and no loose ends were left (aside from the obligatory leave-it-vaguely-open-for-possible-sequel ending). Indeed, not a mindless action flick. Speaking of which…

Now on the fight scenes: As to be expected with a film starring a pro-wrestler, the fights were over the top… but in a good way. They all were well choreographed. The Rock’s character is averse to guns, so the bulk of the fights are dodging bullets and disarming his assailants “peacefully,” using actual martial arts with only the occasional suplex and drop kick. That doesn’t mean there wasn’t a kick-ass shoot out at the end, oh no. He’ll shoot you if need be.

There are many reasons to go see this movie – It’s fun for one. The camera work was good and the scenery was beautiful. The Rock can indeed act. There’s a Scotsman pilot/preacher who thinks he’s Irish (or an Irish preacher/pilot wanting to be a Scotsman). You’ll need to see it to figure out some references from this review. And most timportant you’ll need to see it because of the score:

For being what it is, for not taking itself too seriously (the intro proves that right off the bat), for knowing it’s an adventure/comedy and living up to that notion extremely well – I give The Rundown a 6 out of 6 on the New World Otter’s arbitrary scale of stuff and things. Suspend your disbelief and go see it.