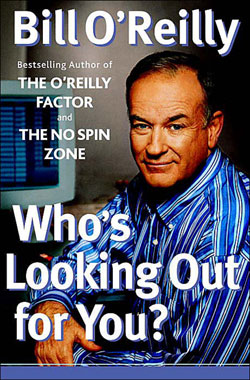 Who’s Looking Out For You? Bill O’Reilly returns and he’s just as outraged at injustice as he was in The No Spin Zone. As always the last chapter or in this case the last two chapters (plus the forward, but who reads those anyway, right?) get a might preachy and self-helpy which could be a strength or a weakness, depending on how you like your chocolate milk. The rest of the book addresses just what the title implies, those that are looking out for your best interests and those who are waiting to drop the proverbial anvil on your head.

For a quick break down of those you should not regard highly as possible candidates for your Christmas list (or Chanukah list, as the case may be) make note of the following:

Want to know who is looking out for you? Buy the book, open it and proceed to use the grey matter God or Natural Science gave you.

Now clearly O’Reilly is not for everybody, and if you are fairly partisan I would suggest you refer to the litany of literary works by either Rush Limbaugh or Al Franken, they should in theory match either left or right devotee marvelously. Should you however, decide you want a mid-ground common sense, non-politically motivated book of questions and answers, O’Reilly should be given considerable thought.

Do not expect to find a long bibliography at the end of this book, after all, there wasn’t one at the end of The No Spin Zone. O’Reilly does mention name and source citations throughout this book, but offers no vast compilation of websites and data charts for you to follow up on at the end. This of course is a serious detriment if you dislike him because he’s a “liberal” or a “conservative.” But then again if you’re billing him as either, you’ll find a plethora of things to discredit him about, regardless of their actual truth.

Overall, he employs a reasonable amount of both right-leaning and left-leaning strategies to cope with today’s serious problems. Because he is forthcoming, and tackles problems head with no concern for the politically correct rule of the day, I’m giving Who’s Looking Out For You? a 5. I’ll dock him a point for neglecting a concise bibliography at the end. And for Bill O’Reilly the man, a nomination for the 2008 U.S. Presidential campaign.