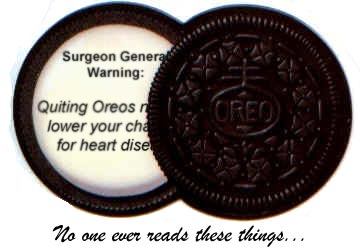 You Want to Ban What?!

(This whole thing happened last week, and I should have gotten to it then. But, this works out since I can cover the ending (…?) too) If that’s dead, here’s a txt of it.

I guess it was a round last Monday when the teasers for the news let loose the following: “Activists in California are pushing to ban the sale of Oreos, and you’ll never guess why!!

Now in today’s f***ed up, uber-PC society, only one thought passed through my skull – RACISM! Has to be. Somebody, somewhere just got offended by “Oreo” cookies, I bet you anything; and so they, on “behalf” of millions of people who had no idea or cared that they were being insulted, would collect billions and stop this cretin of a cookie icon from spreading it’s word of hate.

Well, when I heard what the story was actually about, I was relieved… not happy or elated, but slightly assuaged that we as a people haven’t gone that far… yet.

However it is still preposterous to sue because it has trans fat. That’s the bad-for-you-but-makes-everything-all-better fat; that’s why you can lick the cream off an Oreo easier than say, a Hydrox.

Something like this is not a court issue; it’s a home issue, much like that whole “McDonald’s kills” debacle (read my commentary). Parents have got to be the ones to slap them devil cookies from their kid’s stubby fingers! Thankfully the suit isn’t going anywhere: “A lawyer who generated international publicity by seeking to ban Oreo cookies in California said on Thursday he would withdraw his suit, explaining the news coverage had made people aware of the health risks of eating one of America’s favorite snacks.” (Reuters)

Sure the coverage has made people aware, but do they care? I don’t. I take the classic “I’m going to die one way or another,” look on this. Sure I could have a heart attack after a few cookies and a glass of milk, but I could also choke on a carrot. Don’t get me wrong, I love carrots; however, I’d rather have a chocolate aftertaste in my mouth for eternity than be an orange ghost.